2006-2007 – Managed a series of four paid informational webcasts on the subject of qualified plan design. Total gross revenue was roughly $60,000.  Sent mass advertising emails and managed registrations.  Registrations were not approved until check or credit card payment was received and processed.  Followed up with people who had not paid to maximize participation on each web cast.  Handled post-webcast service issues, such as sending duplicate presentation packets to those who hadn’t downloaded them before they were taken down from our web site. Notated web cast participants in the sales database, so that we could follow-up later regarding related products. 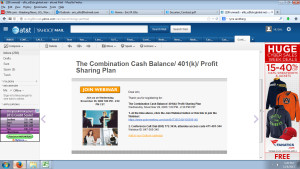